Tim talks with the members of Studio Revolver in Atlanta, some of whom are have done work for Cartoon Network and storyboarded TV commercials. Not beginners, these are folks who are accomplished and in demand.

So why’d they decide to make their own Web comics? Isn’t that how artists try to make names for themselves? Time times are a-changin’…

It’s been a while since we caught up with Rashad Doucet (“My Dog is a Superhero”, “Nadia’s Jewelry Box”) and Jarrett Williams (“SuperPro K.O.”, “Lunar Boy”), two graduates of the Savannah College of Art and Design who have been on the podcast several times apiece. This time Tim takes them on together, and hilarity — not to mention some great conversation about building a comics career — ensues!

Tim and Mulele are back with two comics, submitted for critique by their creators:

Michael Balestreri & Alex Siquig have several comics at blacksnowcomic.com, all of them centering around a group of superheroes. We tap our feet on the non-existent floor, and invoke Chris Schweizer’s “Guide to Spotting Tangents.” (Chris appeared in Deconstructing Comics Episode 157!)

Michael Liggett’s “Electric 1937” is set in a fantastically imaginative alternate reality. The comic just needs to tell us about it a bit sooner.

While comics continue to register in the American consciousness as being inherently “for kids”, conversely, the “Wednesday stack” crowd wring their collective hands about an apparent lack of comics readers under the voting age. There are comics out there for kids, but where can you find them? And, is anyone reading them?

Tim investigates these questions and more, with three guests: Buddy Scalera, author of Comics from Start to Finish and now a writer on the new Richie Rich title; Rashad Doucet, creator of My Dog is a Superhero; and Brent Erwin, Co-Publisher and General Partner at APE Entertainment. When last we checked in with Jarrett Williams, he was a student at Savannah College of Art & Design, and creator of the Web comic “Lunar Boy”. Since then, he’s graduated from SCAD and signed with Oni Press to publish a pro wrestling graphic novel series, “Super Pro K.O.”!  Tim talks with Jarret about his take on the wrestling business, how he deals with criticism, his work process, and more. 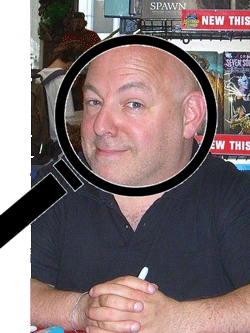 Our friend Jarrett Williams returns to talk about his experiences at the Savannah College of Art and Design, including the SEQALAB podcast and his Web comic, Lunar Boy. Also, a talk with Mulele about the conclusion of his project for Kodansha, and what he plans to focus on next… Reading Comics is a book by Douglas Wolk, aimed at a somewhat academic audience who isn’t familiar with comics and is wondering, “So do I have to pretend to like graphic novels now, too?” Tim and special guest reviewer Chris Schweizer from the Savannah College of Art and Design talk about what they liked (and only pretended to like) about the book.