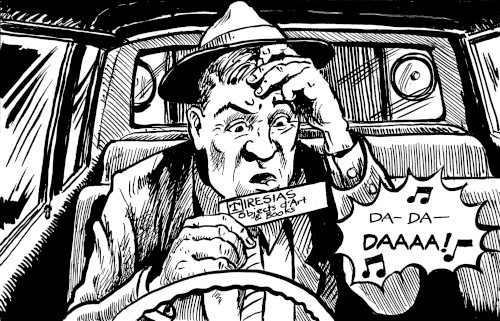 This time we look at some of the latest work by one of our favorites, David Dye: The forthcoming Bush Fire, and two stories written by Roger Stitson, Tales of the Blue Sage and Cut Down. David Dye’s first issue of Amazing Tales caught our eyes a couple of months ago, so David sent along the next two issues. While they’re artistically good, an aspect of one story made us very uncomfortable…

Also, Tim has a question about the course of Mulele’s comics career, and Mulele has some thoughts about the Watchmen TV show. Masashi Kishimoto’s Naruto, about a school for ninja, ran from 1999 to 2014. What’s appealing about this series to kids? In this episode, Kumar asks a kid — his own 10-year-old son, Ashwin! Kumar’s been reading it himself, so father and son exchange takes on the comic, including what it was about the anime version that didn’t measure up to the manga, and Ashwin’s favorite Naruto character. For the past several decades there have been a lot of comics, movies, and other fiction involving “bad futures”, with lots of poverty, violence, environmental destruction, and the like. Why has this genre been so appealing to so many?

In this episode, Emmet O’Cuana talks with Mark Hobby about why this genre endures and how Mark has approached it in his own comic, Job Dun: Fat Assassin. They also discuss why British writers have led the pack on bad future stories, how Watchmen and the X-Men fit into the discussion, why sex in media seems to upset some people more than violence, and more.