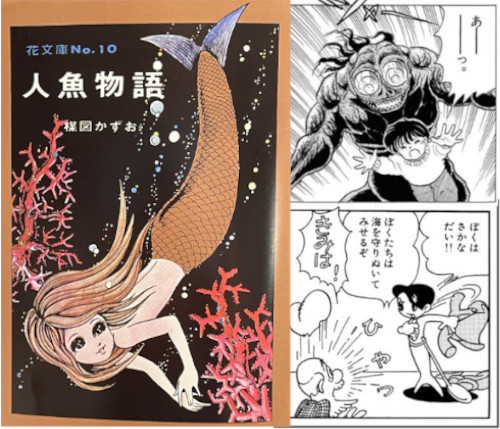 Patrick Ijima-Washburn (a.k.a. “Patrick W.”) has been doing some deep research on certain themes used in manga. Last year, he told us about scary cats in manga; this time it’s (mostly scary) mermaids — or, to be gender neutral, “merfolk.” Thinking it would be a topic easily covered, he was soon caught in a tsunami of manga fish-people, from adaptations of “The Little Mermaid,” to creepy human-like creatures that live in the water, Creature of the Black Lagoon style. He shares his findings here, focusing on merfolk in the works of (clockwise from left) Kazuo Umezu, Rumiko Takahashi, and Osamu Tezuka.

Patrick’s video about mermaids in manga This week, Emmet, Patrick, Tim, and Chuck Coletta talk about their favorite comics of the past decade! If you’re looking for good comics that you might have missed from the 2010s — from superhero to comedy, historical to horror — we’ll give you plenty of titles to look up!

(All titles below are linked to Amazon – to help support the show, pick up any titles you’re interested in through these links!)

by Jean-Michel Dupont and Mezzo

I Love This Part: Hardcover Edition

My Favorite Thing Is Monsters

and Steeple by John Allison

by Al Ewing and Joe Bennett

by Kieron Gillen and Caspar Wijngaard

by Jiro Kuwata, translated by Sheldon Drzka (To the Batpoles! 64)

by Garth Ennis and Michael Dipascale

by David Hyne and Shaky Kane

My Favorite Thing is Monsters by Emil Ferris

by Ed Brubaker and Sean Phillips

by Jason Aaron and Jason Latour

by Matt Fraction and David Aja

by Warren Ellis and Declan Shalvey

Madman In Your Face 3D Special

H.P. Lovecraft’s The Hound and Other Stories

by Cullen Bunn and Tyler Crook

by Sholly Fisch and Dario Brizuela

Life With Archie: The Married Life Horror writer H.P. Lovecraft understood that it was more upsetting to let the reader imagine the horrific thing, than to actually show it. So, can one really do Lovecraft in comics effectively?

In volume 1 of his comics adaptation of Lovecraft’s H.P. Lovecraft’s At the Mountains of Madness Volume 1 (Manga)

, Gou Tanabe (so far) hasn’t spoiled the reveal in the way some other comics creators have, in other Lovecraft-based comics. Emmet and Kumar discuss.

In this episode, Tim and Mulele discuss these comics, submitted by their creators: Old Man of the Mountain issue 1, by Tom Rapka and Ariez Hernandez, includes an execution-style murder and three teens getting brutally, graphically cut to pieces. And yet, somehow it feels like it’s not meant to be a horror series. What is this comic trying to do?

That question goes double for On Syntaphore, by Lion’s Lips, because, while the art is attractive, the story is hard to discern — and even the reason for that isn’t quite clear.

Tim and Mulele discuss both, and also some listener mail, and Mulele’s upcoming trip to the Toronto Comic Arts Festival! ns! Along with it, the work of Guy LeMay (“Z-Blade XX”) also returns, as he gives us a look at his more recent work. Listen to find out how Tim and Mulele evaluate “War Within” (written by Marcus Jones) and “Zombie Headhunter” (written by Guy and Tamey LeMay), both released under Guy’s Strong Guy Comics imprint! A society infested and defined by smokelike spirits, and high school factionalized by the issue, make up L.S. Zwarenstein’s “Geist”. Tim and Mulele critique.