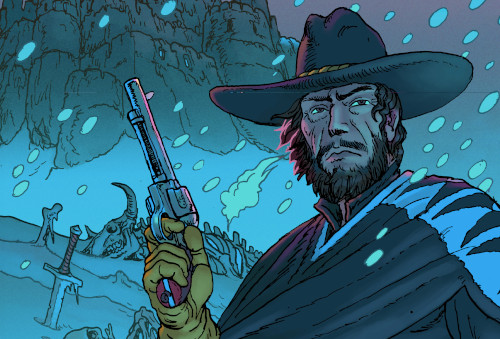 A supernatural western, Holy West, captivates Tim and Adam in this episode. The comic features smart writing by Seth Jacob and beautiful art by Daniel Irizarri. Now that we’ve given away whether we liked it, listen to the show and check out the comic! While the majority of Rick Parker‘s comics jobs have been lettering, he’s also known as an artist and writer, including on Marvel’s Beavis and Butt-Head comics in the 1990s and Papercutz’ Tales from the Crypt. In this episode, Koom asks Rick about the experience of working at Marvel in the ’70s (including that time he was in a physical altercation in the office!), working as a New York taxi driver pre-Marvel, what was involved in old-school hand lettering of comics, and more.

We turn our attention to comics lettering this week, and longtime letterer Rus Wooton. Rus worked on a lot of Marvel books in the 2000s, and his work can currently be seen on numerous Image titles, including Black Science (left). Tim talks with Rus about what makes lettering good or bad, how to get lettering work, the pluses and minuses of all-caps lettering vs “sentence case,” comics written and drawn by Rus, and more.