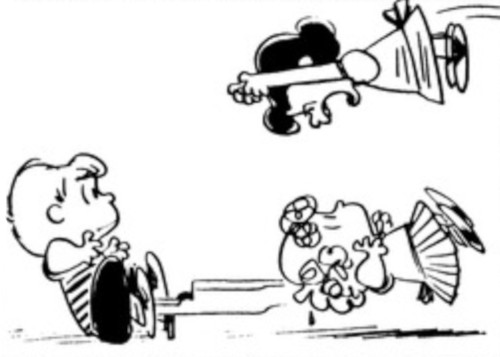 7/13/58 Linus, chased by Snoopy, throws his blanket into an open window

7/26/59 Snoopy, Linus, and blanket go crashing into the doghouse, which rolls down a hill and crashes into a tree

2/9/58 Linus takes his sled up a hill, then realizes there’s a tree in his way

1/4/59 Snoopy slides around on ice until he’s run over by a bunch of hockey players — very Minnesota!

1/18/59 Lucy fails at throwing a snowball at Charlie Brown, so she kicks him

5/12/57 Linus hangs his blanket on a nail temporarily so he can catch a baseball — barehanded??