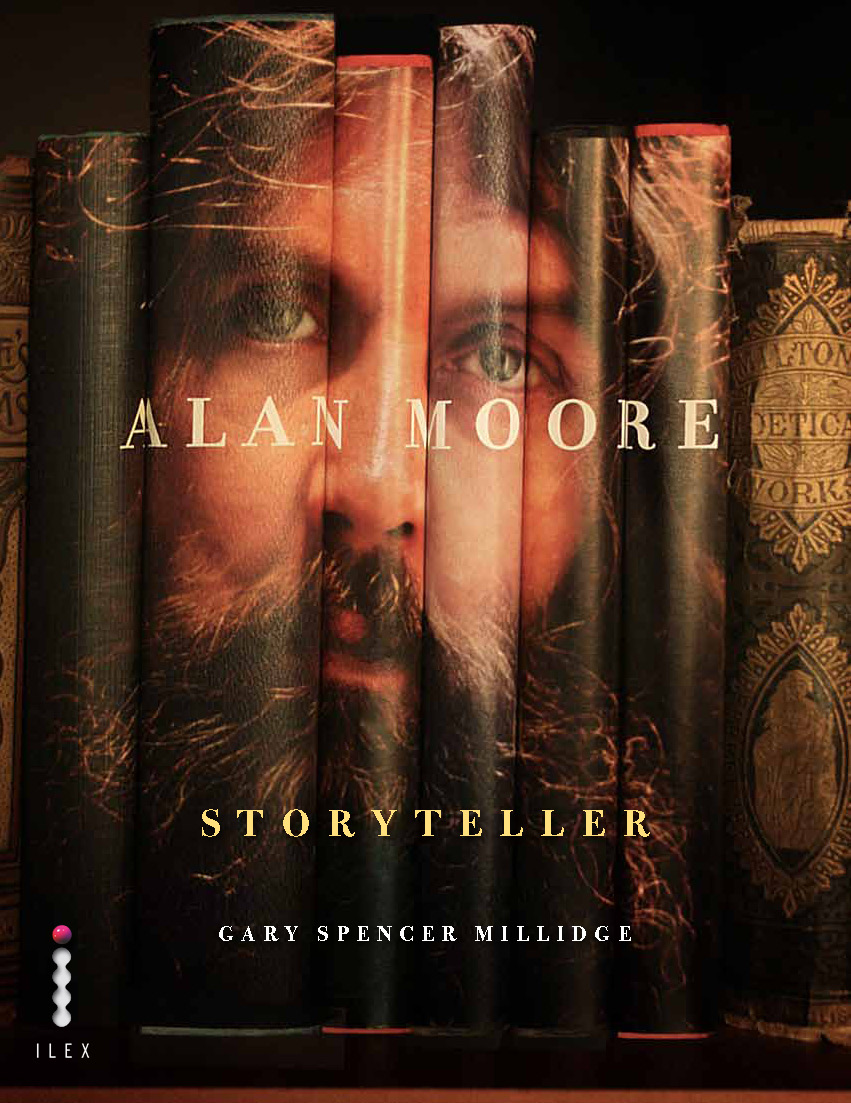 Conflict of Interest Warning: I provided scans of some of the rare material featured in this book, and I have a “Thanks” credit in it.

When this book was first announced, many of us Alan Moore fans were expecting a prose biography (the first) of Alan Moore. What we get instead is actually more like a coffee table art book chronological biography of the writings of Alan Moore.

There is little personal detail about Moore here: no interviews with family members, no attempts to untangle / delve into his professional falling-outs over the years, no tabloid junk. As with other coffee table books, this one seems to be designed to be read in bits and pieces, starting from anywhere. Art from comics throughout Moore’s career is reprinted at massive size, and is just as much the focus as the text. This might make it sound like the book would be more attractive for “casual” comics fans rather than hardcore Moore fanatics, but I think the opposite is true. It is a cliché to say it, but there is something in here for everybody.

There is so much rare Alan Moore related art in Storyteller that it’s really quite astonishing. Gary has uncovered a large amount of work from Moore’s Arts Lab days in early ’70s which even the most diligent fans will never have seen before or even knew existed. There are several of Moore’s pre-script thumbnails which were never intended for public consumption. Also reproduced are many rare, candid family photos. Over 4 pages Gary also reproduces the “Turin Shroud of comics” as he calls it — the legendary table-cloth sized Big Numbers chart, previously seen only if you’ve ever been in Alan Moore’s house, which would make you the most hardcore Moore fan of all time, ergo you are Melinda Gebbie and married to him. We even get Christmas cards Alan Moore made for his parents when he was a child. Since Moore’s parents are dead, I have to guess these were provided to Gary by Moore himself, meaning he has Christmas cards he drew when he was 8 kicking around the house, but does not own a copy of Watchmen — ha!

There is a middle period in the book (and Moore’s career) where the art becomes more familiar — Swamp Thing, Watchmen, V For Vendetta, etc. Here too you might think there is not much of interest for those who have followed Moore’s work with any regularity. Not at all. Gary is himself a comics writer and artist (of the excellent Strangehaven) and that dual perspective has allowed him to take an ideal approach to Moore’s work that we often forget: that Moore is so precise as a writer, that in the best of his comics the art writes the story. Reacquainting myself with Moore’s work in this era through this book, and seeing the art reproduced at such a large size really reminded me of this quality in Moore’s work. In fact, Gary devotes a lot of time to considering the art for each of Moore’s projects (more than other books about Moore do), and his insights encouraged me to reassess some of Moore’s work which I had been a bit dismissive of before.

The only section that sort of suffered from the large repro was the Image / Liefeld era of Moore’s career. Gary — like I myself would — champions almost everything Moore’s written, but you can almost hear him choking back tears as he describes some of this material. The term “insipid characters” to describe Liefeld’s creations is one of the only negative descriptions to be found in the book.

Speaking of the art in the book, one of the things I loved about the reproduction was that he used scans from the original printings. What I mean is: when you look at a Swamp Thing page in Storyteller, you can see “through” the flimsy newsprint to the page on the flip side. It’s what it would have been like to read the issues at the time they came out instead of in the current glossy reprints. As you work through the book, you can see the paper quality getting better and better as Moore’s works become more ambitious and prestigious. In particular, the beauty of John Coulthart’s CD covers at this size is staggering.

The only weird thing is that Gary tackles each of Moore’s works at the time they were first conceived, not when they were completed. For example, the section on Lost Girls occurs when he starts the project (1988), not when he finishes it (2006). My instinct would have been to do it the other way around, but the more I think about it, the more nonsensical that seems too. If you know anything about Moore’s career, then you know that this is a tricky business. There has to be some jumping around with things getting mentioned twice — at inception and completion, even along the way. Maybe the subject matter defies easy chronotization (I made that word up). Gary has done his best making sense of it. In fact, if this temporal hopscotch turns out to be confusing for people unfamiliar with Moore’s work, never fear: there is a fold out (!) timeline at the back which graphs and charts when the hell everything happened.

There is also a CD sampler included featuring many of Moore’s musical dalliances — some tracks never before released! The real shocker here, for anyone like me only familiar with his spoken word releases, is that Moore can actually sing, and that his voice is just as mercurial and chameleon-like as his writings, and can be just as fun, haunting, outrageous, and everything else.

These past few years, it seems as if the more Alan Moore slowly fades from Diamond Previews, the more books about him are popping up. There were the two Bill Baker interview books (one of which came out in two versions), the recently released Conversations, two versions of The Extraordinary Works, Portrait, Pocket Guide etc. Some were good, some were not. Storyteller is uniformly excellent, and finally rectifies the egregious error almost all those other books made by giving the art the love and attention it deserves, thereby giving Moore’s comics writing the context he always intended for it. Not to be missed. 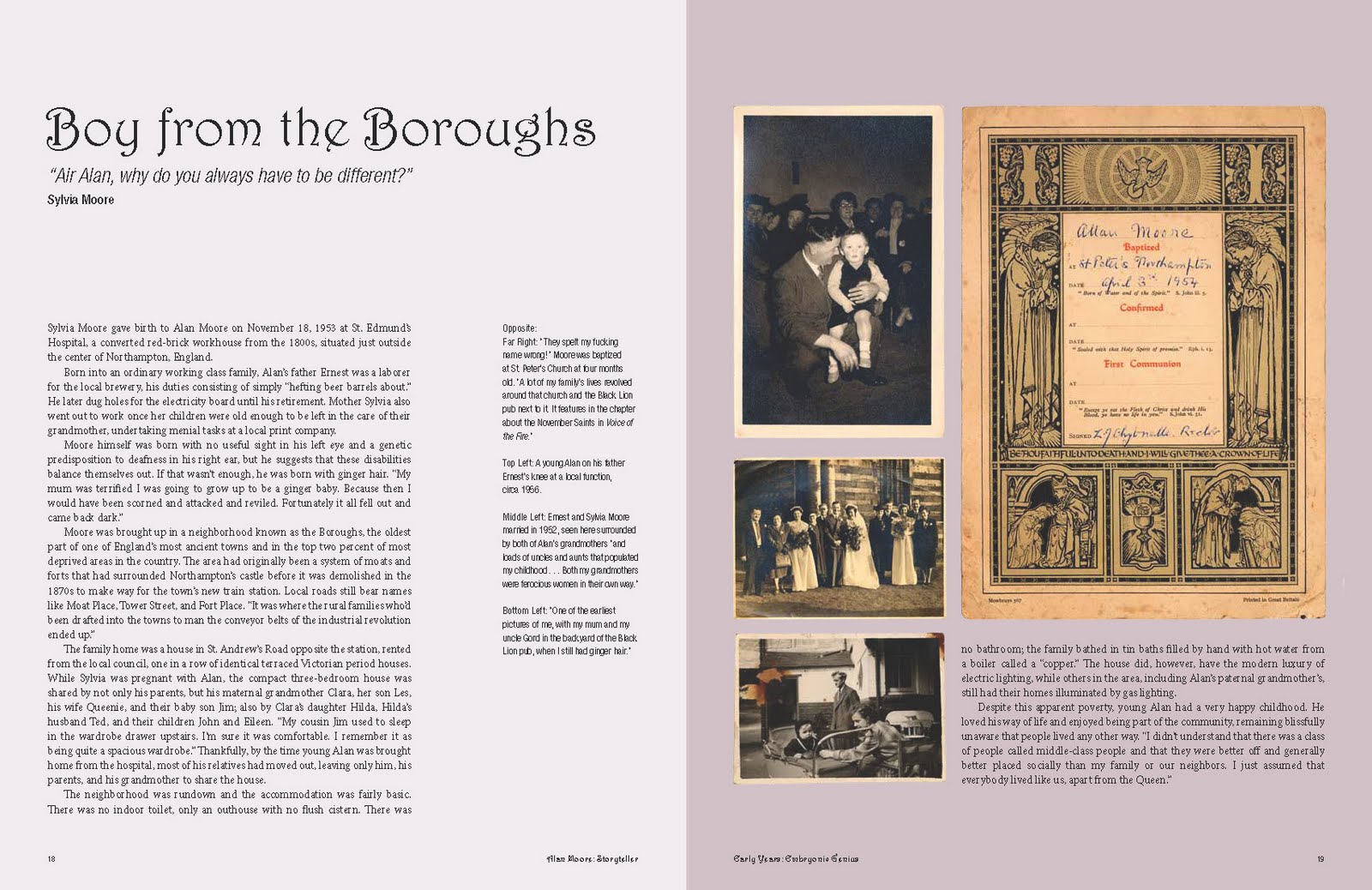